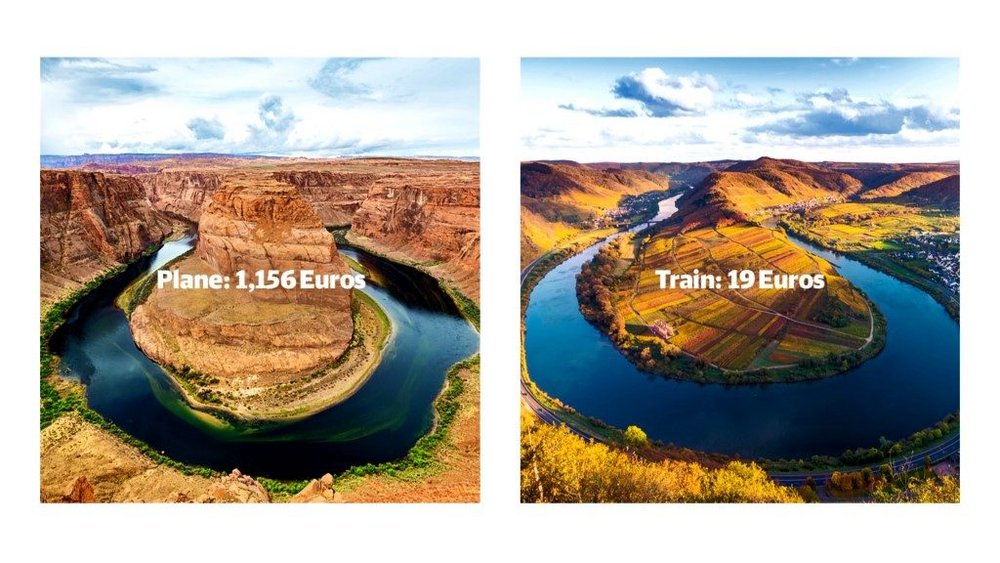 We’re all a little guilty of not venturing beyond our ‘filter bubble’ – a term coined by Internet activist Eli Pariser to describe the state of intellectual isolation that results from phenomena like personalised searches, which mean that we’re likely to read only what’s in our cultural or ideological domain.

That’s why it pays to look at what’s going on beyond our own backyard. Here are some of the best foreign marketing campaigns that you’ve (probably) never heard of.

Drawing on a very simple idea, German Rail looked at what its target market wanted and, quite simply, gave it to them! (Deutsche Bahn)

In 2019, German Rail launched a campaign to encourage Germans not to fly abroad for their holidays but travel within Germany. Quite a hard sell, or so you’d think. Using the hashtag #no need to fly, the company used Facebook data to identify target groups who were interested in certain destinations. It then used this data to target them with personalised ads. For example, why travel from Cologne to Sri Lanka when you can get a similar view in Saxony (and save yourself 1,181 euros, no less)?

The results speak for themselves, and are pretty astounding: a 6.1% conversion rate, with a 24% increase in revenue and an 850% click-through rate.

The idea is simply brilliant, and is a really savvy move against the backdrop of a global pandemic, when all of us crave a bit of escapism. And given the various travel restrictions, domestic tourism is an easy sell – if you know how!

The concept: a magazine and PR agency with a social purpose

A photo of Djamel, accompanied by a post detailing his story and experience of being homeless. The caption – the company’s motto – reads: ‘Making the invisible visible’. Djamel explains that ‘sans papiers on n’est personne’ – without papers, you’re nobody (Sans A_ – Facebook)

Sans A_ was founded back in 2015 by Martin Besson, who decided to challenge himself by spending 24 hours living on the streets of Paris to experience homelessness. And the rest is history. The name is derived from the French phrase sans abri (meaning homeless; literally: without shelter), and the founder has explained that we are all sans a: sans affection (without affection), sans amitié (without friendship), sans amour (without love) or sans argent (without money). The organisation’s aim is two-fold: to raise awareness of homelessness and to encourage civic action.

One of the ways it does so is by giving homeless people a platform to tell their story. The photos aim to capture the reality of being homeless in France, and each story makes an often-overlooked issue a highly personal one. If you’ve ever been guilty of passing someone on the street and avoiding eye contact, Sans_A’s strategy doesn’t give you the luxury of turning a blind eye. You’re immediately drawn in by the intimate portraits of the people the organisation helps, and there’s something incredibly human about wanting to read someone else’s story. Besson and his team have developed a highly emotive social media tool by drawing on the power of storytelling.

The concept: a quirky ‘nap bar’

The strategy: word of mouth/organic

Traditional customs coincide with fast-paced city life in this nap bar, which doubles up as a hostel and workspace during the day (Siesta & Go)

OK, the best ideas don’t always come from looking at other cultures, but delving deeper into the customs of your own. That’s what Madrid-based company Siesta & Go have done. For 9 euros an hour (or 6 euros for half an hour), you can take a break from your busy work schedule and pop in for a quick siesta!

While the company has done a couple of blog posts, its marketing leaves a lot to be desired. But luckily, with such a novel idea, word of mouth does a lot of the marketing for you. For that reason, it’s no wonder that the company is mentioned on a host of tourist sites and news sites, even boasting a mention in the Indy Lifestyle section, along with Elle and Cosmopolitan.

We use cookies on our website to give you the most relevant experience by remembering your preferences and repeat visits. By clicking “Accept”, you consent to the use of ALL the cookies.
Do not sell my personal information.
Cookie SettingsAccept
Manage consent

This website uses cookies to improve your experience while you navigate through the website. Out of these, the cookies that are categorized as necessary are stored on your browser as they are essential for the working of basic functionalities of the website. We also use third-party cookies that help us analyze and understand how you use this website. These cookies will be stored in your browser only with your consent. You also have the option to opt-out of these cookies. But opting out of some of these cookies may affect your browsing experience.
Necessary Always Enabled
Necessary cookies are absolutely essential for the website to function properly. These cookies ensure basic functionalities and security features of the website, anonymously.
Functional
Functional cookies help to perform certain functionalities like sharing the content of the website on social media platforms, collect feedbacks, and other third-party features.
Performance
Performance cookies are used to understand and analyze the key performance indexes of the website which helps in delivering a better user experience for the visitors.
Analytics
Analytical cookies are used to understand how visitors interact with the website. These cookies help provide information on metrics the number of visitors, bounce rate, traffic source, etc.
Advertisement
Advertisement cookies are used to provide visitors with relevant ads and marketing campaigns. These cookies track visitors across websites and collect information to provide customized ads.
Others
Other uncategorized cookies are those that are being analyzed and have not been classified into a category as yet.
SAVE & ACCEPT